Train Stories #3: The Man Who Cried Out 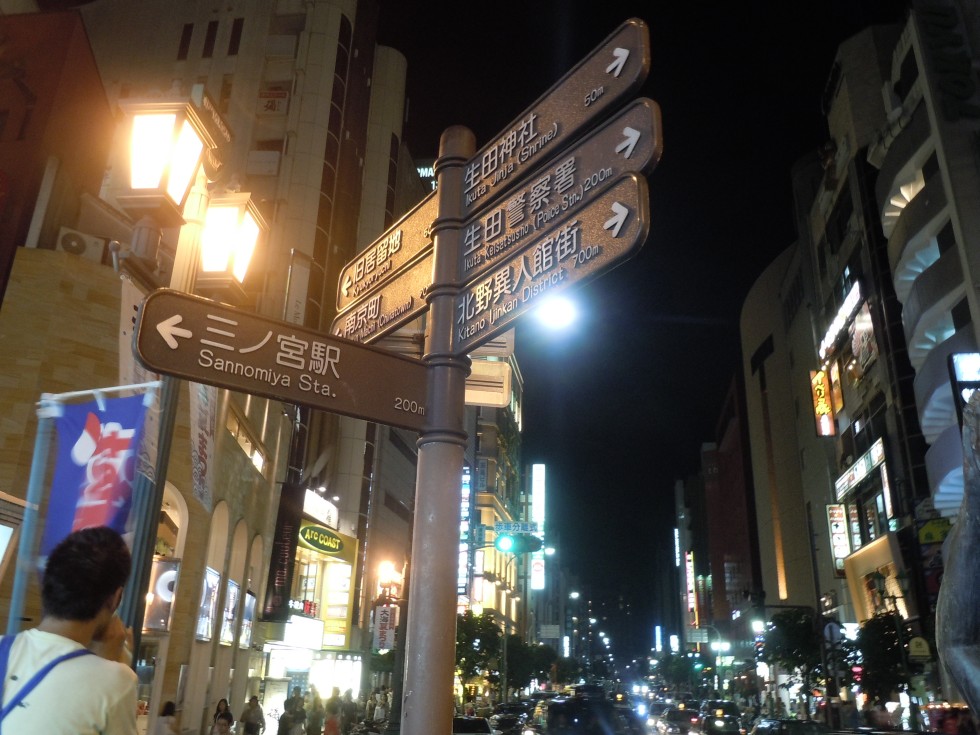 The signs of Kobe at night.

Fully recovered from a 7.2 magnitude earthquake that destroyed the city and killed thousands in 1995, Kobe is a trendy Japanese port city in the Kansai region of the country.  With a population of about 1.5 million and close to Kyoto and Osaka, it is also one of the larger metropolises in Japan.

I recently spent a weekend there this summer with an American friend, admiring the local sites and enjoying the simple pleasures of people-watching. Life in bustling Kobe seemed very different from my slow-moving country life in Namerikawa: Elegant women in high-fashion walked with confidence around town in high heels; streets were lined with boutiques and coffee shops; and Kobe’s main train station (Sannoimya Station) was bustling at all hours of the day with people traveling to nearby Osaka and shoppers buying delicious Kobe waffles or other goods.

By all accounts, I had a great weekend: I ate at a lovely Mexican restaurant (foreign food is a rare find in Toyama); I saw an impressive dolphin show at the famed Kobe City Suma Marine Aquarium; and I enjoyed a lovely view of fireworks on top of Mt. Rokko.

But during my last hours in Kobe, I was reminded of how fortunate I am to be able to travel and see new things.

About two hours before my train back to Namerikawa was scheduled to depart, my friend and I wandered around Sannomiya Station to find our  way to the correct platform. I was also struggling to find last-minute omiyage for some of my co-workers (it is a nice custom in Japan to bring back small candies/treats from a city you visit). As both of us looked around the station to find our bearings, an elderly man in his 60s or 70s limped toward us. I can’t remember his exact words, but he spoke in broken English.

He lifted one of his pants up. His leg was almost all bone and covered in sores. He was skinny, a little unshaven and had a slight hunch. A little uncertain about what to do, I looked to my friend.

In America, I have been approached by several homeless people asking for money. On the streets of Chicago, it is common for panhandlers to beg for money in train stations or outside stores. While I have seen homeless men in Tokyo and Toyama, I had never been approached by a Japanese person asking for money.   And although I am quite familiar with talking with and helping homeless people (I volunteered at my local PADs as a teenager and also wrote about homelessness for several Chicago publications), I normally like to support homeless individuals who are connected to an organization, whether it be PADs or StreetWise.

In Japan, the equivalent to StreetWise is The Big Issue, which I have seen Japanese men sell on the streets of Tokyo and Kanazawa. The Japanese man in Kobe, however, had no The Big Issue to sell, was alone and looked desperate.

“Okay,” my friend said. “Let’s buy you a lunch. How about some onigiri (rice balls)?”

The man nodded and said OK.

“Is there a konbini (コンビニ/convenient store) nearby?” my friend asked.

“This way,” the man said. He pointed straight.

Normally, I wouldn’t have followed a strange man, but I was with my friend, also a man, and it was daylight. We started to walk together.

“Where abouts are you from?” my friend asked. The Japanese man didn’t seem to understand and pointed to the street he wanted to walk down. Both of us looked at our watches, uncertain about the time and if we could walk there and make our trains.

“I’m sorry, but we have to go. Train,” my friend said pointing to his watch. “How about we give you some money to buy the onigiri?”

He nodded. “Thank you, thank you.” He seemed humbled and surprised.

My friend and I gave him a little money and wished him luck. I went back to the train station, said goodbye to my friend and finally found some omiyage.

I bought Kobe cookies and passed them out to co-workers the next day. I was happy, but I also thought of the old Japanese man.  I hope he found a good lunch.