Train Stories # 9: The Man in Rainbow

Osaka, the third largest city in Japan with a population of more than 17 million in the greater metropolitan area, has the reputation of being one of the rougher cities in Japan.  Compared to Tokyo, where millions of businessmen and woman in ubiquitous black suits and shoes ride the trains like zombies in a trance, the people of Osaka can sometimes be a little more straightforward and colorful.  It’s often said that Osaka people just like to be different.

They stand on the right side of the escalator (instead of the uniform left in Tokyo), they bump into you with uttering as many sumimasen (excuse me) and they sometimes can be a little abrasive.  The first time I ever witnessed a Japanese person shouting at someone was in Osaka’s JR Fukushima Station, where a man in casual jeans and a sweatshirt screamed at the train attendants for a good 10 minutes (he was still shouting when I boarded the train).  The train attendants just stood there without so much blinking and let the man release his energy. 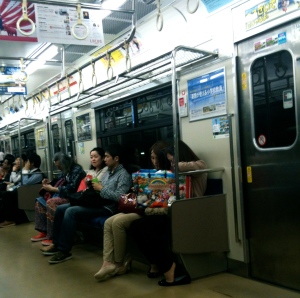 An awesome hippie in Osaka

But even with that said, Osaka is still in Japan, meaning although it has a grittier vibe compared to other Japanese cities, it’s still a city brimming with people who work to death and travel to and from business in uniform fashion.  It’s a way of life everywhere in Japan.  You follow the rules.  You are on time.  You straighten your black suit or skirt and do what you are told without complaining.  Their work ethic is both admirable and maddening at times, like an entire population of people is just waiting to break free from the chains of twelve-hour per day labor.

So when I spotted a Japanese man wearing a blue baja shirt, patterned bell-bottom jeans and red shoes on an Osaka JR Loop Line train, my eyes were drawn to his colorful wardrobe.  Amid the surrounding grey of the train and passengers wearing conservative weekend clothing, he stood out like a rainbow emerging from the clouds after a rainfall.  He was probably in his early 50s and had a full head of long, stringy grey hair.  His youth was far gone in his face, but his clothes spoke another language.  The vibrant colors of his clothes seemed to scream:

I can’t say for certain if he thought the same thing, but I was proud of him.

← Train Stories #8: The Boy in Blue
Top 3 Reasons the JET Program is Worthwhile →